People in multidimensional poverty in urban areas, by region and subregion, 2016 Although urban areas of the region have much less income poverty than rural areas, on multidimensional counts, the region has a significant number of people who are poor, compared with other regions. Of the 1.5 billion multidimensionally poor people living in 102 developing countries in 2016, 53.9 percent lived in South and South-West Asia alone, more than the share living in Africa (at 35.8 percent). Out of the total 260 million urban people living in multidimensional poverty, the Asia-Pacific region accounts for more than half (54.7 percent); South and South-West Asia share 45.8 percent of the urban poor population. 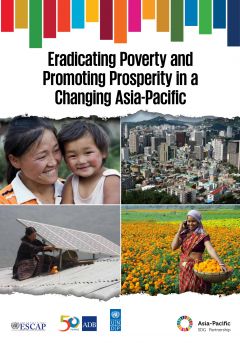 Eradicating Poverty and Promoting Prosperity in a Changing Asia-Pacific